For the past seven years, Apple has released a new flagship iPhone in the fall, usually at the tail-end of September. This year will be no different as we prepare for what might be the biggest iPhone change since the iPhone 6 and iPhone 6 Plus. With so many rumors swirling around the ether, it’s hard to sort through trash to find treasure. Let’s only talk about the facts that can be verified or have a higher degree of likeliness.

Just like the last 3 years, we’re going to see another pair of similarly featured phones in two sizes. The smaller of the two will retain the 4.7” diagonal screen size with a single rear camera. The Plus variant will continue to have a 5.5” diagonal screen with dual rear cameras. This is not any big change over last year’s duo. The only two big changes I can see happening on this front are the addition of wireless charging and increased water/dust resistance.

If you’re not familiar with mobile device wireless charging that’s been around for quite some time in Android phones, it’s close proximity power transfer. Your device sits on a conductive pad that transfers power to your device through the back of the case. It’s not truly wireless because this conductive pad needs to be plugged in with a wire, and your device still needs to contact the pad to receive power.

Other features in these models that could make an appearance are new color finishes, better image signal processing, and higher storage tiers.

The rumor of an Apple iPhone Pro surfaced last summer when there was traces of a better, more expensive iPhone 7 Plus. This has since transformed into an all new form factor that will debut this year. The new form factor will sport a 5.8” diagonal screen, but the case of the iPhone will be much smaller aligning the physical size of the device directly between the iPhone 7 and iPhone 7 Plus. The new screen will be powered by OLED (Organic Light Emitting Diode) which will give us deeper blacks and use less energy. The reduced footprint of the phone presents some challenges for making an edge-to-edge screen. The front facing camera and sensors will not be set in the screen, so there will be a small notch on the upper part of the screen. This notch will house the all-new front facing cameras, infrared sensors, and speaker. 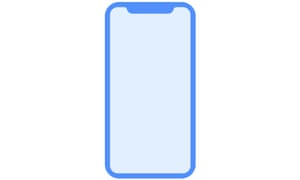 This new form factor will also be the first iPhone ever without a home button. It is said the the home button function will be built into the screen, which will allow Apple to use the area where the home button previously sat. After the debut of 3D Touch and last year’s virtual home button, this seems like the culmination of research and evolution finally coming to fruition. Not much else is known at this point on the new yet-to-be named iPhone Pro. Speculation prices this iPhone above the current offering somewhere between $999 and $1499. Pricing that depends on what storage is offered and who they market this device to.

Naming an iPhone is always kept under wraps until presentation day, so we never know for sure what these things are going to be called. Ever since the iPhone 3GS, the iPhone releases have followed a X/Xs naming scheme. Canonically, the non-s years brought redesigns whereas the s years brought speed and internal improvements. This pattern was pretty much broken the last two years when we got almost all new iPhones with the iPhone 6s and 6s Plus, and not-quite-redesigned iPhone 7 and iPhone 7 Plus. My gut feeling tells me that Apple won’t break their trend of naming devices in order, regardless of what the new features are. I anticipate us seeing the iPhone 7s and iPhone 7s Plus. The outlier is the Pro model… They should just call it iPhone Pro or attach it to this generation by going with iPhone 7s Pro. I’ve seen some grumblings of Apple following the iPad trend and using generic names like iPhone, iPhone Plus, and iPhone Pro.

What Apple debuts is sure to be a hit and will sell millions of units. It’s going to be great to be able to have a premium model in addition to two already great form factors.